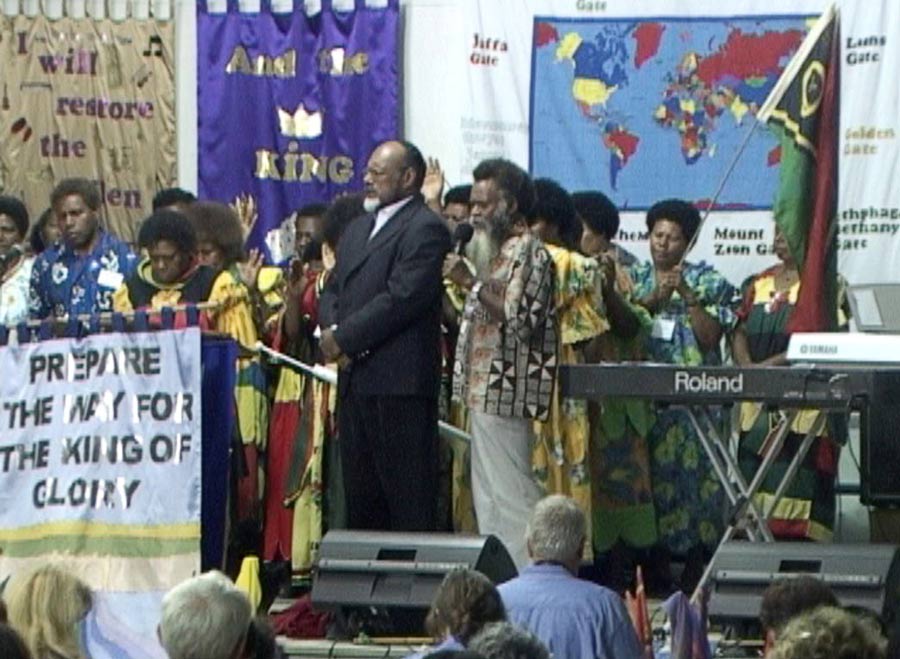 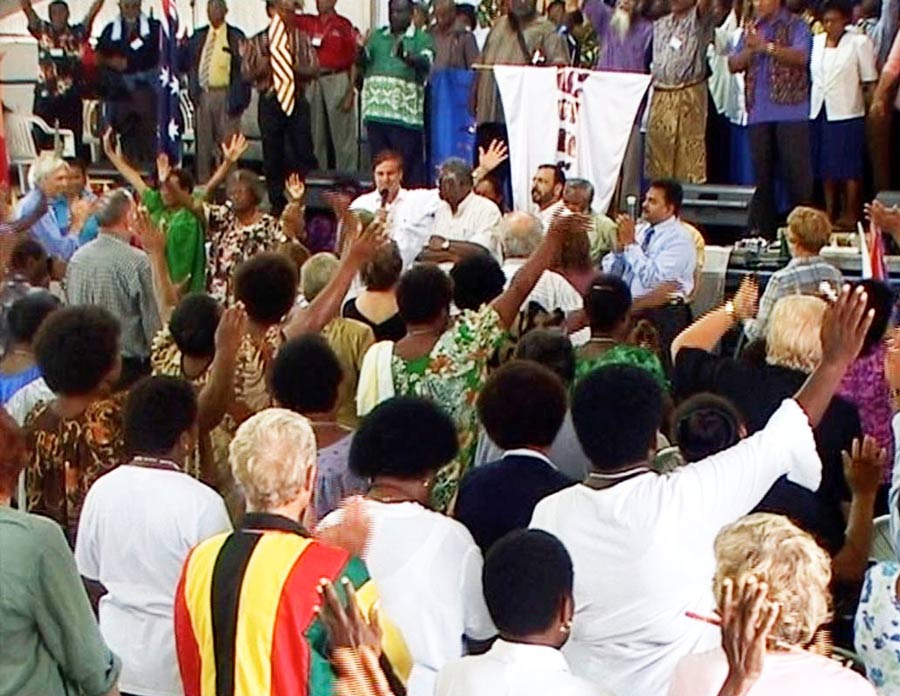 The Bethany Gate APPA convocation in Cairns held on the 400th anniversary of Ferdinand de Quiros’ prophecy of Australia and the Pacific as the Great South Lands of the Holy Spirit. DVDs are available thanks to David Jack. It was an opportunity for many Indigenous friends of Israel to gather.

Nearly 3,000 people from across the Pacific, Australia, Asia and the Middle East (with about 30 nations represented) gathered in Cairns Australia 11–16 May 2006. It was held in the Cairns Showgrounds in a large marquee – a Tabernacle of David. Hawaii and Nuie Island attended the APPA for the first time.

The themes were opening up the gates and breakthrough to Jerusalem.

Open up the gates and let the King of Glory in…

Pass through, pass through the gates!
Prepare the way for the people.
Build up, build up the highway!
Remove the stones.
Raise a banner for the nations.
Isaiah 62:10

One who breaks open the way will go up before them;
They will break through the gate and go out.
Their king will pass through before them,
The Lord at their head.
Micah 2:13

The world has been divided into 12 gateways as a prayer strategy by Ps Tom Hess of JHOPFAN. The Deep Sea Canoe vision of Ps Michael Maeliau in the Solomon Islands is about a revival that starts in the Pacific (the ends of the earth) and goes around the world to Jerusalem (the centre of the earth spiritually). This Deep Sea Canoe vision is a rallying force within the APPA and the Pacific are arising with a love of Israel and her people.

At the convocation, Ps Michael Maeliau launched two books – the Deep Sea Canoe Vision and Uluru: the Heart of the Nation. Michael felt that the conference organised by the Centre for International Reconciliation and Peace at Uluru in July 2005 was pivotal for what God is doing in Australia and the Pacific and was an important precursor to the Bethany Gate All Pacific Prayer Assembly. He details his own prayer journeys to Australia and Ps Milo Siilata of NZ, Janet Maki of the Cook Islands and Ps Barbara Miller of Australia are co-authors.

It is 400 years since Captain Fernandez de Quiros stood on Vanuatu believing that he had discovered the great south land and prophetically declared on Pentecost 14 May 1606 “the south land of the Holy Spirit” over Australia and the Islands of the Pacific to the South Pole.

It is 400 years since the Dutch ship, the Duyfken or the “little dove” made the first recorded contact of outsiders with Aboriginal people of Australia between Mapoon and Aurukun (March 1606).

It is also 400 years since Torres, the Spanish explorer, after separating from de Quiros came upon the Torres Strait to which his name was given.

The convocation hosts were Ps Norman and Barbara Miller and the Centre for International Reconciliation and Peace (local church Tabernacle of David), Ps Michael Maeliau of the All Pacific Prayer Assembly (APPA) and Ps Tom Hess of the House of Prayer for All Nations Jerusalem (JHOPFAN). Norman and Barbara are also the Bethany Gate leaders for Australia under JHOPFAN. Bret Ridley is the APPA representative for Australia. The churches of Cairns also worked in unity for the event with the first night of the conference being run by the Cairns Ministers Fraternal.

An Aboriginal elder of the traditional owners did a welcome to country and a representative for the Mayor of Cairns opened the convocation. The Torres Strait Islanders did a dance and were led by Ps Aiden and Annie Pensio from Darnley Is. This was the first time the Torres Strait had participated in the APPA. A light horseman in uniform also spoke at the opening. We had hoped for a number of light horsemen to ride around the oval but it wasn’t possible.

Eleven buses that seated 50 people in each bus, journeyed to Yarrabah, a nearby Aboriginal community singing and praising God for a time of further welcoming and feasting and a service in the Anglican church.

The different nations and people that were represented at the convocation dressed in their national dress and took to the streets of Cairns and marched through the city to declare the gates open for the King of Glory to come in. Norman and Barbara carried a picture of the Ark of the Covenant at the beginning of the Parade of the Nations to declare that God’s glory is coming to the city of Cairns and the nation of Australia. We felt it was like David and Israel bringing the ark to Jerusalem with rejoicing and dancing. So, we stopped on the way and people danced in the streets.

This picture of the Ark of the Covenant was given to Tom Hess to take back to Jerusalem as a prophetic act of when the nations go up to Jerusalem. A smaller picture of the Ark of the Covenant was handed on to PNG to carry the glory of God to PNG for the hosting of the APPA August 2007. The APPA is expecting the Deep Sea Canoe vision to be fulfilled in PNG next year. The Papua New Guineans came to Cairns in huge numbers (about 600) and an offering was taken up so they could host the Prayer Assembly next year. This was to bless all the APPA nations via PNG. Benjamin was blessed by Joseph. (The Bethany Gate is associated with Joseph as each gate relates to a son of Jacob.) PNG came looking for a 5-fold blessing or portion from Australia and they received it.

Through this convocation many lives were transformed and healings sovereignly occurred.  Many people made comments that they had been taken to a new level in their walk with God and that they would never be the same again.

Guest speakers came from Israel – Ps Tom Hess, Kuwait (Egyptian born) – Ps Nabil Attalah, India – Ps Mathew Kuruvilla, Singapore – Ps George Annadorai, Solomon Islands –Ps Michael Maeliau, Vanuatu – ex PM Edward Natapei, New Zealand – Ps Milo Sillata and around Australia – Ps Noel Mann, the Millers and others to share what God had laid on their hearts with the people.  There were acts of repentance and declarations and forgiveness as each speaker shared their message at this historic occasion.  Ps Norman Miller repented to Pacific Islanders for blackbirding. There was repentance by the Dutch to the Aurukun Aboriginal people for loss of life on contact with the “Dufyken.” There was also repentance by a Spanish intercessor for Spain’s the treatment of Jews and Torres Strait Islanders.

There were three panels – a Middle Eastern Christian panel, a panel of Messianic Jews and pro-Israel Christian leaders and an Australian Indigenous leaders’ panel. There was repentance and healing between “Ishmaels” and Isaacs” with Norman and I and Ps Eileen McDonald of Jewish heritage washing the feet of the Middle Eastern speakers after Ps Nabil Attalah gave an impassioned message.

The ex-Prime Minister of Vanuatu, Edward Natapei is still a minister in the Vanuatu government and there was a good team from Vanuatu even though celebrations were occurring in Vanuatu at the same time. Minister Natapei was the key speaker at a Pacific Leaders Breakfast which we held in a restaurant. Senator Barnaby Joyce opened it and a number of Christian parliamentarians from the Pacific attended as well as key representatives from nations represented at the conference.

The last two days of the conference were given over to 4 streams of ministry – Pacific Leaders Fellowship, Fathers Arise, Women’s Arise and Youth Arise. Ps Geoff Armitage who led the Youth Arise reported a wonderful move of the Lord with the youth and Ps Emmanuel and Agnes Fave who led the Fathers and Women’s Arise respectively sensed the wonderful presence of the Lord.

Tom Hess said it was the most anointed and best organised conference he had ever been to and he conferences and travels regularly. He marvelled over the high praise. There were times when the praise and worship just changed and you knew you had touched a new level in God.

The conference was a special time for Indigenous people to receive a greater heart for Israel and to become even firmer friends of Israel. 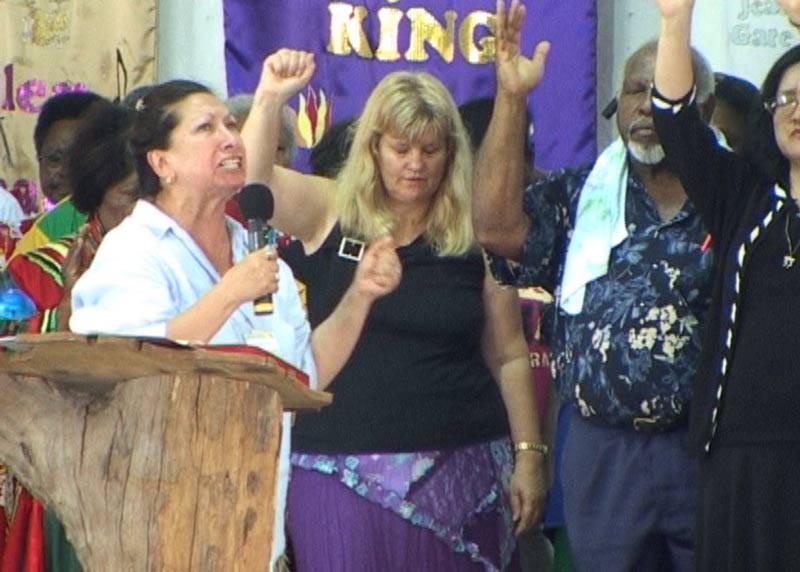 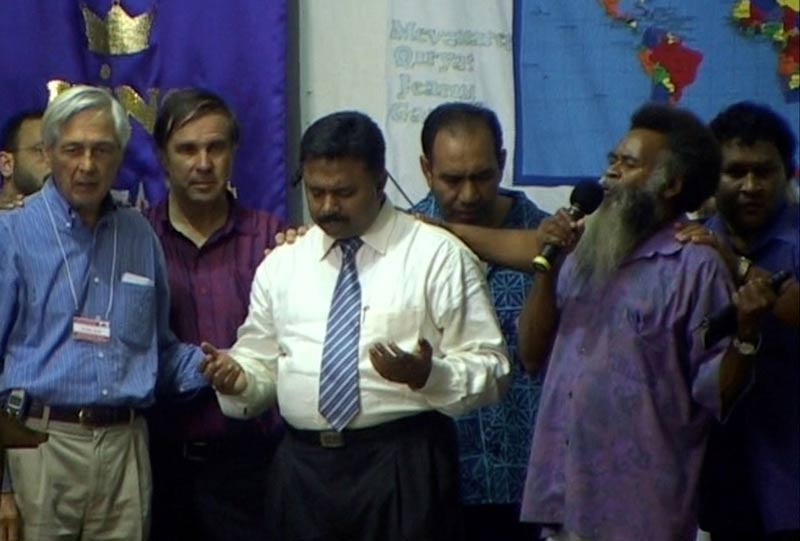 De Quiros’ Declaration below rewritten by Ps Barbara Miller for the Bethany Gate All Pacific Prayer Assembly 11-16 May 2006 held in Cairns, Australia and for the 400th anniversary of the original declaration.

SOUTH LAND OF THE HOLY SPIRIT

RAISING OF THE CROSS

BE WITNESSES THE HEAVENS AND THE EARTH, AND THE SEA WITH ALL ITS INHIBITANTS, AND THOSE WHO ARE PRESENT, THAT WE ASSEMBLED MEMBERS OF THE PACIFIC AND BETHANY GATE NATIONS, RAISE AND PLANT IN THE NAME OF JESUS CHRIST, SON OF THE ETERNAL FATHER, TRUE GOD AND MAN, THIS SIGN OF THE HOLY CROSS, ON WHICH HIS MOST HOLY BODY WAS CRUCIFIED AND WHERE HE GAVE HIS LIFE AS A RANSOM FOR THE WHOLE HUMAN RACE AND ROSE AGAIN VICTORIOUS. ON THIS 400TH ANNIVERSARY, STANDING IN CAIRNS, AUSTRALIA, THE FOLLOWING SIX DECLARATIONS ARE READ WITH JOY AND GLADNESS.

POSESSION IN THE NAME OF THE MOST HOLY TRINITY

WE ASSEMBLED NATIONS OF THE PACIFIC HAVE COME WITH THE AUTHORITY OF GOD THE FATHER, SON AND HOLY SPIRIT TO AFFIRM POSSESSION OF THE ISLANDS AND LANDS AS FAR AS THE SOUTH POLE IN THE NAME OF THE HOLY TRINITY.

POSSESSION IN THE NAME OF THE WHOLE BODY OF CHRIST

WE RECLAIM THESE SAID LANDS IN THE NAME OF JESUS CHRIST, SAVIOUR OF ALL MEN AND OF THE WHOLE BODY OF CHRIST NOT JUST THE CATHOLIC CHURCH.

POSSESSION IN THE NAME OF GOD’S KINGDOM AND HIS SAINTS

THESE SAID LANDS POSSESSED IN THE NAME OF ST FRANCIS AND HIS ORDER, WE RECLAIM FOR GOD’S KINGDOM AND THE SAINTS HE WOULD APPOINT TO HAVE CUSTODY AND STEWARDSHIP OVER IT.

POSSESSION IN THE NAME OF GOD’S KINGDOM AND HIS SAINTS

THESE SAID LANDS POSSESSED IN THE NAME OF JOHN OF GOD AND HIS ORDER, WE RECLAIM FOR GOD’S KINGDOM AND THE SAINTS HE WOULD APPOINT TO HAVE CUSTODY AND STEWARDSHIP OVER IT.

SUCH POSSESSION TO RESPECT THE INDIGENOUS INHABITANTS OF THE LAND

WE DECLARE WE RESPECT THE INHERITANCE OF THE INDIGENOUS INHABITANTS OF THESE SAID LANDS AND AFFIRM ACTS 17:26 “FROM ONE NATION HE MADE EVERY NATION OF MEN, THAT THEY SHOULD INHABIT THE WHOLE EARTH; AND HE DETERMINED THE TIMES SET FOR THEM AND THE EXACT PLACES WHERE THEY SHOULD LIVE.”

POSSESSION IN THE NAME OF HIS MAJESTY KING JESUS

WE REVOKE POSSSESSION OF THE ISLANDS AND LANDS FROM VANUATU TO THE SOUTH POLE FROM THE KING OF SPAIN AND DECLARE THEY ARE THE POSSESSION OF KING JESUS!!!