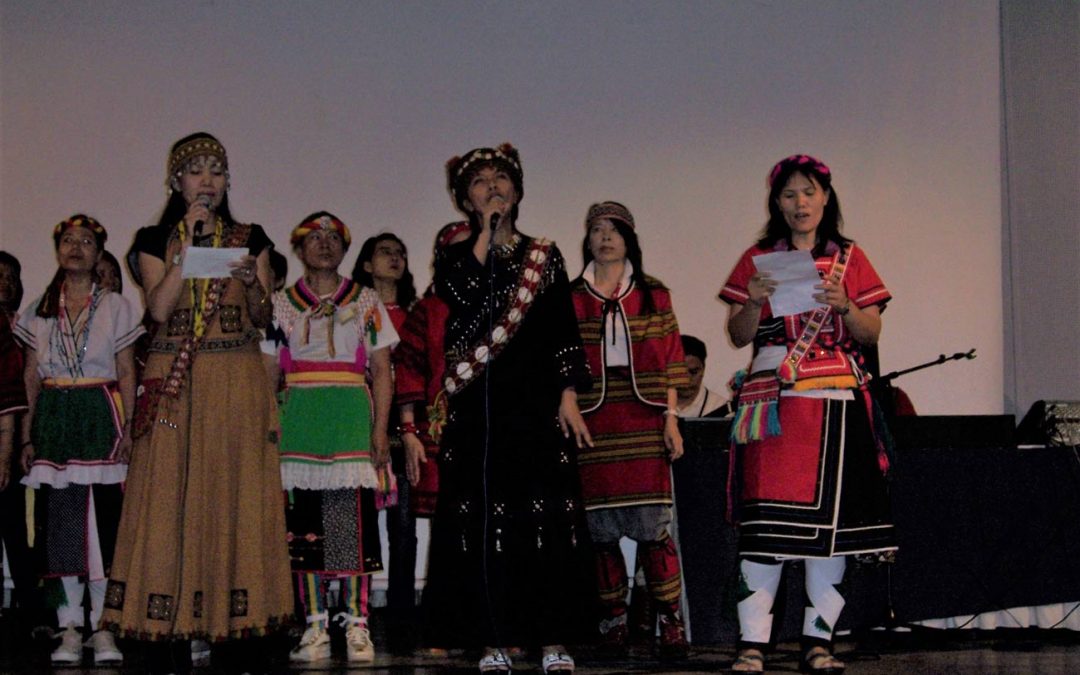 This was the second time the All Nations Convocation Jerusalem featured an Indigenous Track.

Norman Miller, an Aboriginal pastor from Australia, who was heading up the track with his wife Barbara, welcomed all Indigenous gatekeepers from the 12 gates and Deborah Miller opened in prayer.

The team from New Caledonia opened with a song and then the song “This is My Desire” was sung. Speakers were Ps Norman and Ps Barbara Miller and Ps Riscarje from Guatemala, whose message was translated from Spanish. Ruth Kendino, a volunteer from PNG working in JHOFAN in Jerusalem for the Pacific was honoured. 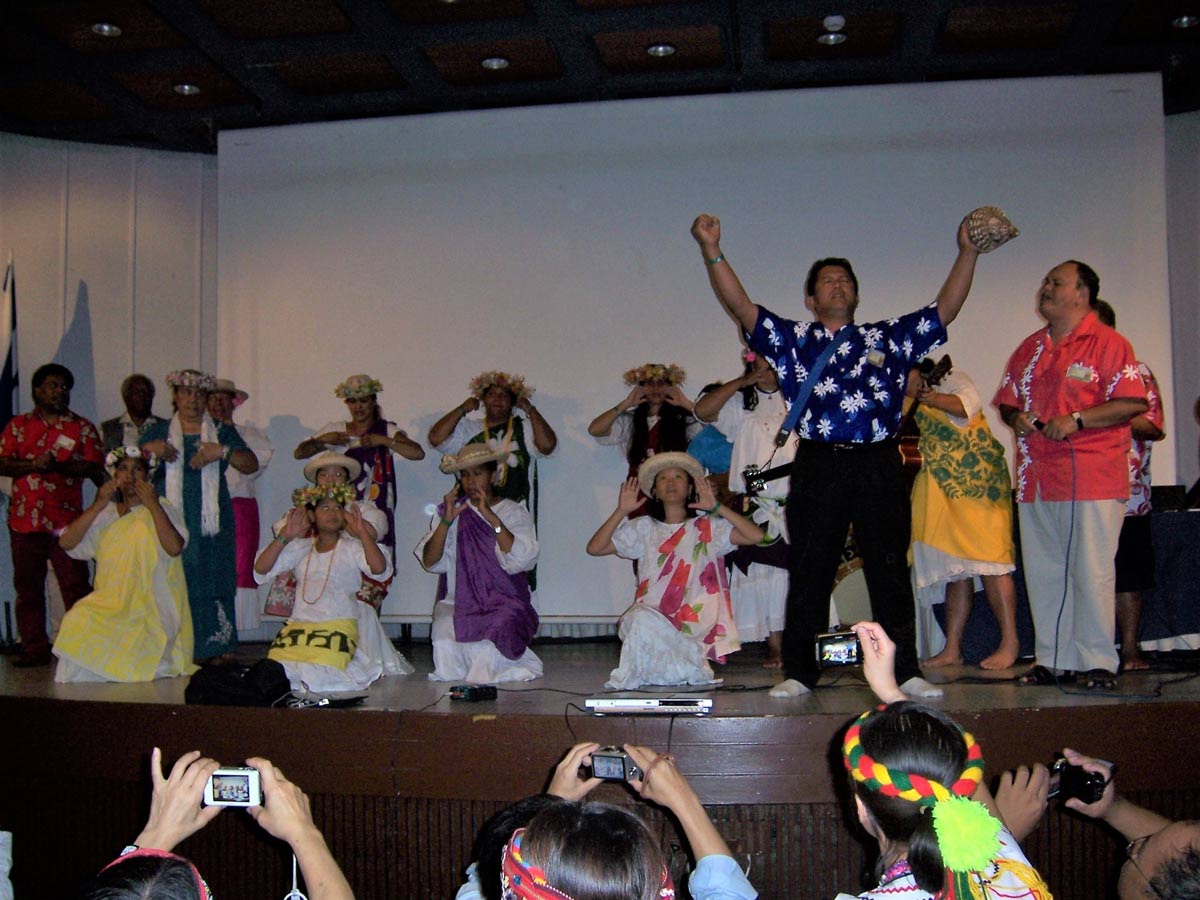 Ps Norman and Barbara shared on 2 Cor 5:18-19 that we all have the ministry of reconciliation and the message of reconciliation and that we are to reconcile people to Christ and to each other. This year is a significant one in Australia because it is the 50th anniversary of NAIDOC – National Aboriginal and Islanders Day Observance Committee, the 50th anniversary since the dormitory system was closed down at Palm Island Aboriginal community and 50 years since the Palm Island strike for award wages and better living conditions for Aborigines. The dormitory system was where Aboriginal children were taken away from their parents.

NAIDOC was developed from Aboriginal Sunday, a day to remember the Indigenous people of Australia, and was started by an Aboriginal Christian, William Cooper. It was then taken up as a mainstream event.

William Cooper recognized that many Aboriginal people felt sad that their land and way of life had been taken from them by force and found it hard to celebrate on Australia Day each January 26 and called it a Day of Mourning. Some Indigenous people call it Invasion Day. But we praise the Lord that He has been turning our “mourning into dancing” as in Jer 31:13.

In fact, Reconciliation Week, from May 26 – June 3 in Australia each year celebrates 3 major events:

The Lord showed Barbara very clearly that 3 major lies in the history of Australia have been dissolved through these landmark events:

Firstly, after a campaign by many sections of society, the Australian government agreed to hold a referendum to change the Australian Constitution to recognize Indigenous people to be counted in the census. Usually, referendums are not successful but over 90% of the population voted yes. Aboriginals in most states were able to vote in the 1960’s prior to the referendum. The referendum also gave the federal government the power to make laws for Aboriginals, not just state governments.

It took a further 8 years till 1975 when the Australian government enacted the Racial Discrimination Act making it illegal to discriminate against Aborigines. The apartheid laws in South Africa had been modelled on the laws of the state of Queensland in which the Millers live and despite the 1975 Act, the Queensland government resisted complying with the federal legislation until 1984 when the Community Services Acts were passed finally doing away with legal discrimination against Indigenous people in Qld. This is recent history in living memory of people.

Secondly, a few years ago a government inquiry was held into large numbers of part Aboriginal children Australia wide who were taken either by force or by trickery or with their parents consent for schooling and they were never seen again by their parents or community. Children were separated from each other, told their parents didn’t want them or were no good or that they were orphans and these children were brought up in government or church institutions where they were often abused or in white families as white children. They often had problems with identity and rejection. This was Australia’s assimilation policy and these children came to be known as “the stolen generation”. They are the parents of today’s generation. They’ve sometimes had difficulty parenting the present generation because of lack of role models, unresolved issues etc.

While the Howard government has refused to say sorry, some state governments and churches have. Every May 27, Sorry Day events were held for a few years but now as the healing is starting to occur, they are called Journey of Healing Days. Norman and Barbara organised the first Sorry Day healing ceremony in Cairns with Indigenous and non-Indigenous people saying sorry to one another, enabling people to move on.

Thirdly, the legal fiction of “terra nullius” or empty land was perpetuated by the English colonizers of Australia, enabling them to declare it a British colony just over 200 years ago. After a 10-year legal battle, Eddie Mabo and the Murray Island or Meriam people of the Torres Strait Islands between Australia and PNG were successful in June 1992 in taking the Australian and Queensland governments to court and had their prior and continuing occupancy of their land recognized. “Terra Nullius” was overturned and the way opened for Aboriginal and Torres Strait Islander people to establish native title claims.

A big focus of the Miller’s ministry, whose local church is called Tabernacle of David and para church organisation is called the Centre for International Reconciliation and Peace, has been healing history, healing people and healing the land. This has basically been done through identificational repentance at strategic places for key events in history and recovenanting the land to the Lord. Three examples are:

Uluru. At a Ps 24:7 conference organised by the Millers in July 2005 and at which Ps George Annadorai of Singapore and Ps Vuni Nakauyaca from Fiji were speakers, Aboriginal Christian leaders from all over Australia were called in to take responsibility for the sins of their people on the land and to recovenant the land to the Lord. This was led by Ps Vuni. After spiritual warfare prayers at Uluru, cameras unexpectedly caught the rainbow serpent leaving the rock with its eggs. This is the main strongman holding Aboriginal people back and said to be the creator. This was its lair. Many young people had been dying of petrol sniffing at the nearby Aboriginal community of Mutitjulu. Shortly after the conference, the government replaced petrol with opal gas and cut this problem significantly.

Yarrabah. The Millers encouraged local leaders from the Kungandji tribe (Fr Eddie Murgha) and local spiritual leaders such as Fr Leslie Baird and Fr Mick Connolly to repent for the sins of their people and recovenant the land to the Lord. The Millers stood with them on a hill overlooking Yarrabah as they did this. When the Bethany Gate All Pacific Prayer Assembly was held in Cairns in May 2006, the whole conference travelled in a dozen or so buses to Yarrabah for a welcome and Les Baird showed us the sea grass and birds that have returned to Yarrabah just like on the Let the Sea Resound DVD about the Fiji revival.

Darnley Island. The Lord showed Norman His answer to the 9/11 terror attack in the USA was Amos 9:11 restoring the Tabernacle of David. At a Ps 24:7 Redigging the Wells and Transformation conference in Cairns in 2003, the Lord gave Barbara a word about revival at Darnley Is which would spread throughout the Torres Strait, up to PNG, out to the Pacific and down to the Aboriginal communities. The word stirred up excitement in Ps Aiden and Annie Pensio from Darnley Is who heard about it in 2006 and organised an Amos 9/11 Opening the Gates and Redigging the Wells conference on Darnley Is 9/11/06 at which the Millers were speakers. The Millers encouraged those with British heritage to repent for their sins from a massacre which occurred at a well and the local traditional owners also repented of shedding blood.

The conference was timed for the 50th anniversary of the Duke of Edinburgh’s visit, and jubilee was proclaimed. There was reconciliation of the 12 villages through a prophetic act. Darnley Island is the east gate to the Torres Strait and this is where the gospel entered but the western half of the island was closed to the gospel. Since the repentance at the well on the western side, they are now open to the gospel and there is an excitement to worship God on the island especially amongst the children. The fish have come back, the yams and sweet potatoes are growing again, just like on the Let the Sea Resound DVD re Fiji.

It was very exciting to have Ps Riscarje and his wife at the Indigenous Track because they come from Almolonga in Guatemala which has been in revival for over 20 years, probably the longest standing revival in the world. The revival began because of 3 events:

The town of Almolonga, a place with Indigenous Indians and Spanish people, went from being a place where alcohol abuse, domestic violence, child abuse, unemployment, poverty and crime were rife to being a place of family harmony, low crime, full churches and prosperity. The change was dramatic. The jails closed, the courthouse became a place for marriages and as the people became healed, the land was healed and produced greatly. The people worked harder, God gave them good farming strategies and they got many more harvests per year with greater yields in each harvest. For example, the carrots are huge like a man’s forearm and the cabbages are huge. The people did so well exporting their crops to the USA that once poor farmers now own Mercedes Benz trucks fully paid off and they have Christian names proudly displayed on their trucks and businesses.

While it was not part of Ps Riscarge’s message, it is worth noting that Guatemala was the second nation to recognize Israel in 1948 and has kept its close relationship with Israel. 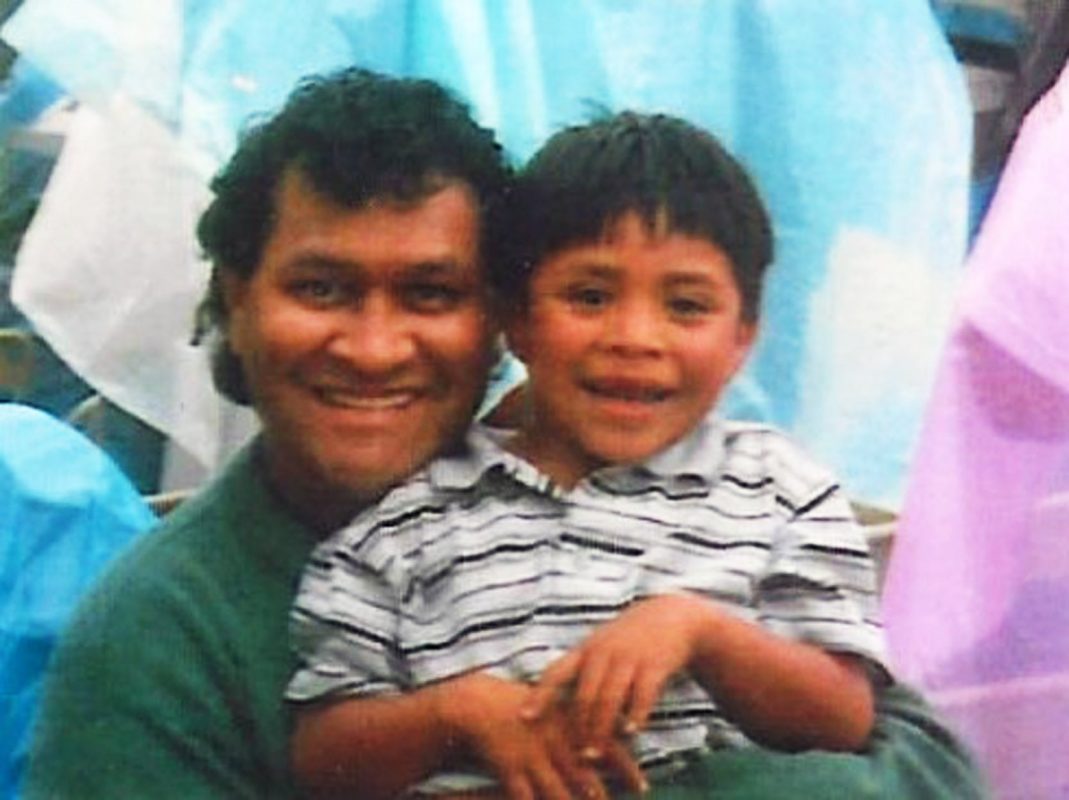 Norman with a First Nations child in Almolonga, Guatemala 1998