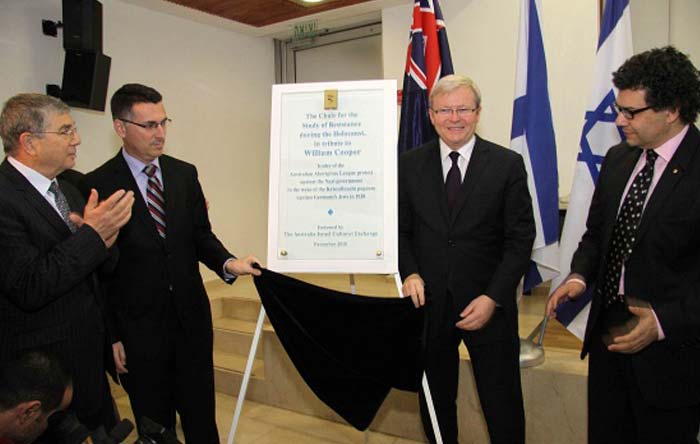 Indigenous Friends of Israel spokesperson Munganbana Norman Miller again today urged the NSW and Federal Labor Party not to change its policy towards Israel in the light of the NSW Labor Conference that will be held this weekend and previous statements by Bob Carr.

Mr Miller said from Cairns, “We would like to proudly follow in the footsteps of Australian Aboriginal William Cooper, who, in 1938, led a group of Indigenous Australians on a protest walk to the German Consulate in Melbourne to protest Kristallnacht, the start of the Holocaust.

“As it was one of the few private protests worldwide against Kristallnacht, William Cooper was honoured by Yad Vashem Holocaust Memorial Centre in Jerusalem in December 2010. A bipartisan group of MPs from Australia was present for the event. We were privileged to be there with them and William Cooper’s family,” said Miller.

“It is fitting that an Indigenous voice be heard,” said Miller “because the Jewish people are the Indigenous people of Israel, contrary to some opinions.”

In contrast to the complete absence of Arabic writing or inscriptions to be found anywhere in the Holy Land dating before the Muslim conquests of the 7th century CE, and the absence of any reference to Palestine as a descriptor for a people before the late nineteenth century, there is an abundance of evidence of a distinct people and polity called “Israel” stretching back to the dawn of the Iron Age, more than 3,200 years ago.  Even for those who do not believe in the Bible, there is a wealth of documents and other archaeological artefacts which attest to the antiquity of Israel, the Jewish people, and a Jewish polity in the Holy Land.

“A succession of conquerors displaced sections of the Jewish population at different times and the Roman colonizers changed its name from Judea to Syria Palaestina in 135CE to try to eradicate its Jewishness,” Miller continued.

“Arabs first arrived in Palestine much later in 640 CE and gained greater influence when they arrived as Muslim conquerors in 1187 CE, especially during Mamluk rule, from 1260-1516 CE.  No distinctively Palestinian polity existed anywhere in the land until the Palestinian Authority was established by agreement with Israel under the Oslo Accords in the 1990s.